In the Dark, Dark Wood

In the Dark, Dark Wood 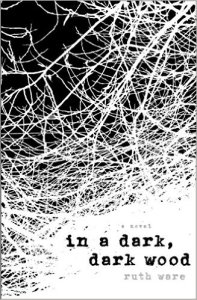 So now that summer is coming to an end, I’ve finally found the perfect beach read. It’s In the Dark, Dark Wood, a novel about a “hen party” (British for bachelorette party) that goes fatally wrong, leaving a blood-splattered narrator, a dead guest, and a lot of questions that urgently need to be answered. With her deft use of past, distant past, and present, fully realized characters, and, best of all, a marvelous re-imagining of all the old mystery-novel tropes, Ware has created a deeply satisfying psychological thriller.

The novel opens with two very quick passages. First, the narrator, Nora, runs through the woods in some sort of desperate trouble. Next, she is waking in the hospital wondering what’s happened, and worse, what she has done. With gruesome anticipation well established, we then settle into the life of a shy young writer who gets an email inviting her to a hen party for a former best friend she hasn’t seen in ten years. I’ve read some criticism of Nora for having accepted the invite, but it’s an invitation that comes with assurances that the bride-to-be remembers her old friend fondly and after all this time still mentions her often. That’s an awfully flattering inducement. And another friend is on the guest list and offers her a ride. So Nora gets to have an outing with a current friend while indulging her curiosity about an old one who seems to be yearning for a reconciliation. I’d have been there in a shot.

The novel continues to move from the hospital, where the police are asking some ominous questions, to the hen party, hosted by the half-crazed Flo whose increasingly hysterical insistence on a perfect weekend swiftly reduces the guests to a bunch of smirking adolescents, to the more distant past where the bride-to-be played such a powerful role in young Nora’s life. And where their friendship ended over a secret too painful to be told even now. The transitions are seamless — we always know exactly when and where we are — and they keep the book rooted in the lives of the characters while moving it urgently forward.

The characters themselves are various degrees of prickly-likable, people we can understand if not exactly admire. Even Flo the lunatic is only a more desperate version of the anxious host that most of us have witnessed, or been, at some point in our lives. And a complex picture takes shape as Nora thinks more and more about her childhood relationship with the future bride. We see a quiet girl who was rescued from obscurity by an outgoing classmate. Nora seems to have benefited greatly from their relationship, and Nora’s occasional anger seems to have resulted from the inevitable resentment of being the weaker half of the duo rather than from any great wrong on the part of her friend. The central question of the plot — who’s to blame? — is echoed nicely in the emotional pasts of the characters. As we learn more about Nora, we slowly realize that ancient grudge she’s been carrying from childhood has stunted her life as a young woman. And this realization leads us to another important question: she seems nice enough, but how much do we trust her?

And while we’re grappling with the big questions of this book, Wares is merrily sending up every cliche of the murder mystery. Spooky old house in the woods? Check, only this one belongs to Flo’s aunt and is a disastrously out of place attempt at modern architecture. Flo frantically tries to keep it pristine while urging her guests to greater hilarity. An ominous weapon? Get this:

Tom moved across to the mantlepiece and started peering into the pots, but then he stopped, his eyes arrested by the same sight that had stopped me in my tracks earlier. “Ker-rist.” It was the shotgun perched on its wooden pegs just above eye level. “Haven’t they heard of Chekhov around here?”

A Ouija board with a frightening message? Yep, but the scary message only comes after the guests uncover numerous pleas from beyond that their host break out the tequila or at least buy some coffee. Flo is so outraged that she threatens to make them all play trivial pursuit if they don’t settle down. Oddly enough, the fatuous nature of these and other well worn props of the mystery novel make them all the scarier. I think it’s because we see them as part of someone’s real life. This is a clever, engaging book, and if it’s too late for a beach read, it’s still perfect for an autumn night.