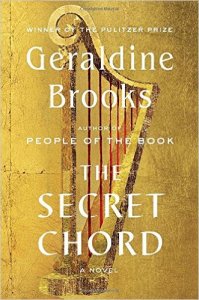 Geraldine Brooks’ newest novel, The Secret Chord, tells the story of King David through the eyes of a prophet, Natan, who at the age of ten foresaw David’s greatness and spent the rest of his life serving him. The prophet-narrator is a brilliant device that allows Brooks to tell the king’s story on three levels at once. The first level is the divine. Natan’s revelations are the powerful, unquestioned word of God, and we never forget that this is a story of the sacred as well as the profane. God’s words are particularly powerful during the times when the prophet can not speak his revelations, and we see David as he cannot see himself, as a man who suffers and will continue to suffer the wrath of heaven. Secondly, we see David as a statesman who fights to build and keep a kingdom here on earth. Because Natan follows David, is privy to the his counsels, and even, at times fights along side him, he is able to give us an accounting that is more reliable than the vain and ambitious king’s would be. Finally, the prophet tells us something that David could not tell because he was not interested enough to have learned about it: the effects his bold acts have on the powerless people who surrounded him. Heaven’s will, the king’s adventures, and the often shattered lives that lie in his wake are woven together by a man who speaks both lyrically and simply of the world in which he lives. The book opens with the words,

There was an almond blossom, yesterday. It had opened its pale petals on a twig of the bough that curls and twists up to my windowsill. This morning, the blossom is gone; the paleness upon the twig is snow. It does one no good, in these hills, to set store by the earth’s steady warming.

I have read and admired all of Brooks’ novels, and there is no doubt in my mind that The Secret Chord is the most beautiful and moving book she has written yet.

God first speaks through Natan at a moment of crisis. “At dawn I walked through my father’s blood and stood face to face with his killer. . . . Then I spoke. Later, others had to tell me what I said. I knew that my lips and tongue were moving, but I could not hear my own words because my head was ringing like a stone under the blows of an iron mallet . . .”

Prophecy overpowers Natan. He sickens before it begins. He doesn’t know what he says. He often faints in the telling, yet he recognizes its importance and regulates his life, remaining chaste and alone so that he can better serve the king at whom the prophecies are aimed. And although it is always abundantly clear that he has no control over his prophecies, he knows that their presence and their absence form the pattern that will create a great nation. He grieves when he does not foresee the sin that David would commit with Batsheva. “If only vision had led me to the roof, to where he stood in the soft air under the luminous moon, what sin, what folly and pain, might then have been prevented.” But, over the course of years, he realizes that there was a reason “why sight failed me that night. I have lived long enough to see the pattern whose first stitch was placed in those late hours. . . still, it gnaws at me.” Natan is both the obedient mouthpiece of God, and the human who continually struggles to understand Him.

He more readily understands David, both the king’s weaknesses (“Where, then, was his empathy? Buried, I supposed, beneath his self-regard.”) and his greatness. Natan shows us David’s determination, his warmth towards his men, and his brilliant mind. He tries to give us an idea of what it was like to hear David’s frequent singing. “To describe the sounds, I find myself turning to other senses — sight and touch. The fall of fine silk through the hand: the rich warmth of enveloping fur. Or a goldsmith beating out a foil, at the moment when he lifts and turns the leaf, the sudden gleam as if sunlight itself had been captured.” Not even Natan’s calm, ascetic, and often critical nature can fully withstand the glory of David.

Natan is also a convenient way for Brooks to tell the story of David’s inner life, emphasizing the events that would have been most emotionally significant to him rather the ones that are most well known today. So, David’s triumph over Goliath is part of the book, but it is not directly experienced. It is only summarized by David’s envious brother who explains that the battle itself was of no great importance. “Everyone makes out it was a massive standoff — two great armies — but that’s not true. Never happened. It was just another skirmish in a long, boring season of skirmishes.” David fought so many battles against long odds. It makes sense to me that, however much defeating Goliath gained him fame and ingratiated him with the existing king, the fight itself would not have been a particularly telling emotional moment for him. Brooks has chosen a narrator who was too young to have seen the fight himself and is not particularly moved by it either.

Natan does see, and is intensely concerned with, the moments that most shaped and revealed David’s character. The humiliation of being rescued in battle by one of his men and the fear that he has grown too old to fight, his love of his first wife’s brother, his music, his city of Ir-David and the return of the ark to it, his sin against Batsheva’s husband and the punishments that followed. These are the incidents of deepest meaning for David, and his loyal follower, and they create a work of great emotional resonance, telling a deeply personal story of one of the Old Testament’s most famous men.

Of course, the moments of very little importance to David also tell us much about both him and the world he lives in. Through the sensitive and questioning Natan, Brooks shows us the bloodshed behind David’s great victories. “On those nights, the dark is full of the cries of the dying and my only relief comes with the rising sun.” We understand the bitterness of David’s first wife and why she would curse him in his moment of sacred joy. The seductive Batsheva? She was trying to avoid the men of her house while performing her ritual purification. The result was a brutal rape and then weeks of terror.

“I lived every day in fear, knowing my life hung by a spider’s thread, waiting for word of my dishonor to reach Uriah – Uriah, a man for whom honor was everything.” She lifted her chin. Her eyes fixed on some distant point. “Have you ever seen a woman stoned to death, Natan? I have. My father made me watch when I was a girl, so I would know what became of faithless wives. And when my monthly signs didn’t come, I thought about that woman, the sound of her moans, her mashed flesh, her shattered bone.  .  .  .At the end of it, she had no face.”

If David is able to ignore Batsheva’s terror, Natan is not. The man who killed Natan’s father and first called his gift of prophecy into being? That was David too. He and his men murdered every member of Natan’s family who “could piss against a wall” because they refused to supply David’s troops. Yet David is so inspired, so glorious and flawed, that who can resist following him as he remakes the world?