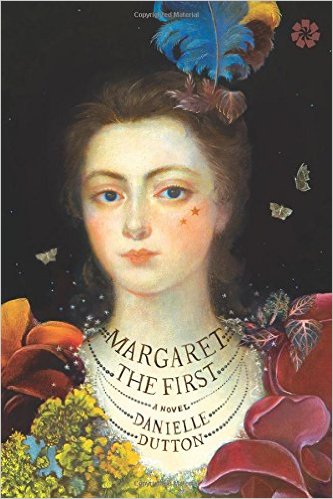 Catapult Books, a small press publishing “ecosystem” which combines workshops, a community bulletin board, a literary magazine, and book publishing, was only founded this past September and has already published a striking work of historical fiction. Other reviewers have, justifiably, focused on the uniqueness of the book’s heroine. Margaret, also known as “Mad Madge,” was a real life 17th century feminist and prolific writer. As she explains herself, while other women might write, “(T)he  poems they circulated among themselves were anonymous elegies for dead children or praise for noble husbands. My own quill went marching across the page. I rejected any clocklike vision of the world I chastised men who hunted for sport.” She is a fascinating character, by turns so shy that she cannot speak and so desperate for attention that she makes a  public appearance in a topless gold gown with her nipples painted red. She is the woman who is praised by her king as a celebrity and who remains, all her life, the passionate child who imagines whole civilizations in the “river-foam bubbles.” Yet as compelling as Margaret is, what I think is most exceptional about this book is its portrayal of the spirit of the Restoration. The characters, the writing style, the setting , the plot combine to create the experience of living in a remarkable and tumultuous age.  It is as deft a  work of historical fiction as I’ve ever seen.

Margaret herself was the child of an old fashioned aristocratic family — a necessary privilege for such a headstrong woman. As a young girl, mobs attack their estate while the family is away, stealing the money and jewels, of course, but also slaughtering the deer and breaking into the private cemetery to defile the coffins and corpses. Later, “The King of England was convicted of treason. The the king of England was dead. It was Tuesday. It was 1649. Parliament hacked off Charles I’s head outside the Banqueting House at Whitehall. The mob, previously sick for it, drew quiet after the blow. The people were burdened with heavy taxes. May Day had been replaced by zealous sermons. Was the Civil War over? No one was sure.” There is little certainty about any of the political upheavals in this book or the many moves between France, Antwerp, and England and from great rural estates to grimy, makeshift rentals in the city. The world simply changes over and over again in a mad rush, and rather than withdraw and pray for safety, the elite invent a bold new way of thinking.

More than anything else, Margaret the First is powered by an almost dizzy sense of new intellectual possibilities. Upper class men, including Hobbes and Descartes, debate one another at Margaret’s home and circulate their own pamphlets on the nature of being. Robert Boyle invents a machine that sucks air out of a chamber and experiments on living things. “The bird began ‘manifestly to droop.’ It staggered, collapsing, gasping. It threw itself down, threw itself down, and then the bird was dead.’  ‘All this,’ she objected, ‘to prove a bird needs air?’ ‘Before devising the pump,’ said William, ‘he’d had to strangle them with his hands.’ Now all London was buzzing with the news: air holds a vital quintessence necessary to life.”

The word “science” does not exist yet, nor does any real semblance of scientific process. Instead there is a profusion of excited new ideas about what makes up the world around us. Margaret charges into the fray, rejecting the Aristotelian world view and insisting on the worlds within worlds concepts of her childhood. She writes philosophy, poetry, fantastical stories in a passionate trance. She makes herself over into a celebrity, even speaking at the newly founded Royal Academy. Everything is possible in this new age! Dutton tells her story in past tense, present tense, future tense, in first, third, and even second person. It all works because the book is as charged with energy and an adventurous spirit as the world and the people it describes. Margaret the First is a short work, not much more than a novella. I read it so quickly that it lasted about as long as one of Margaret’s river foam bubbles, and when it ended I was left with the sense of having witnessed an entire civilization, lighter than air and as fantastical as anything even Margaret could have dreamed up.